I didn’t have a topic worthy to explore in detail today, but there were a few bits and pieces in the news and readers’ comments that are worthy of encapsulation.

1. Vioxx Scorecard Update
I originally published my Vioxx Scorecard in this blog back on August 6, 2006 (see “Vioxx Scorecard: 5-3-14192“). I am not sure if this was the first time a “scorecard” analogy was used, but it certainly has caught on. The Wall Street Journal, for example, now has its own “Trial Scorecard.”

The current scorecard tally is 5-4-14190 (1 undecided). Let me plot that out for you (in logarithmic scale, otherwise the wins and losses would be invisible): 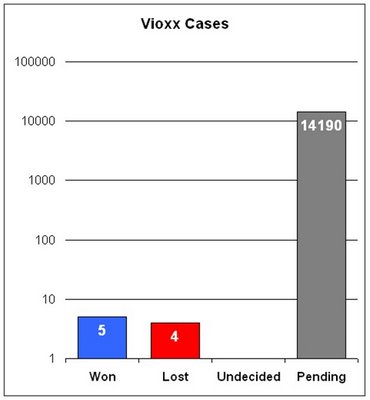 Merck’s record, in other words, has gotten worse since August despite a recent win in New Orleans (see WSJ: “Merck Is Victorious In New Orleans Vioxx Trial“). You might like to take my little quiz or see how long the Vioxx trial season will be according to our readers:

2. Rozerem Ad Team Fesses Up
Ever since I posted the “Rozerem Ads Dis Lincoln, Show Beaver” it’s been the number 1 page visited and has generated the most comments. Like the Vioxx trial topic, the Rozerem DTC campaign will likely be grist for my blog mill for eons to come.

Recently, two anonymous commenters interpreted the ad. They claim to “work for Takeda Pharmaceeticals [sic] (Rozerem)”, which I interpret to mean that they work for one of the ad agencies employed by Takeda to produce these ads. Who else would (1) misspell the name of the company they work for, (2) append “(Rozerem)’ at the end of the name, and (3) give a shit about getting the record straight?

Anyway here’s what they have to say about the use of Abe Lincoln, beaver, et al (I added the bold typeface[e and italics for emphasis):

“I work for Takeda Pharmaceeticals (Rozerem) and let me explain what the figures in the ad mean. Honest Abe signifies honesty and the beaver signifies hard work and industriousness. The clock shows that if you suffer from insomnia, it doesn’t matter what time it is, because you’re still awake regardless, and your Sleep-Wake cycle is off-balance. Rozerem is the only prescription based sleep drug that works on different receptors in your brain that allows you to sleep to REM state(dream state) and this is where you want to be for restful sleep. Other drugs like Ambien and Lunesta work different so that your brain often does not get to the dream state.”

“Just as the above writer, I too work for Takeda Pharmaceuticals (Rozerem). The title of the ad campaign is “your dreams miss you”. The reason for that is b/c just as mentioned above, Rozerem is the only sleep aid that DOES NOT have a risk of suppressing stages 3,4 and REM (dream) sleep. These stages are imparative to mental restoration. If you suppress these stages, patients are not getting a completely restful night of sleep. They are getting to those stages and restoring their bodies. Also, Rozerem has ZERO risk for abuse or dependency, not just a low risk, NO risk. Everyone has dreams that are strange and the point of the commerical is that Rozerem can take you back to those dreams which so many insomnia patients would love to have. Takeda made this commercial a little bizzare so it would catch a patients attention and they would talk to their doctors about the “new sleep drug commercial”. Doctors can then explain how Rozerem is very different from any other sleep aid and explain Rozerem’s benefits and how it should be taken. Since everyone is talking about it and analyzing it, obviously they’ve done their job!”

Note the claims made here: Rozerem is the only prescription based sleep drug that works on different receptors in your brain that allows you to sleep to REM state(dream state) and this is where you want to be for restful sleep…

It’s too bad that these claims and benefits can’t be made more directly in the ads. Certainly, I would have liked to been educated a bit more about sleep and the benefits of Rozerem. Education, after all, is what DTC is all about, isn’t it?

Of course, I am quite suspicious about these claims. Could it be that Takeda does not have the EVIDENCE to back them up? But they must be telling the docs something they are not telling us. How else would the docs be able to tell us how Rozerem is different whereas the ads can’t?

I assume the Takeda sales reps are presenting some choice data — what I really mean is bullshit data — on this REM gobbly gook. Perhaps the ACCME and the OIG might look into the CME programs that Takeda is supporting to see what doctors are being told about this drug by other doctors paid by Takeda.

Or maybe we need to stay tuned. Perhaps the second leg of the Rozerem DTC campaign will finally unveil the REM benefit in a more forthright fashion. Now that the DDMAC division of the FDA has added staff to review DTC ads (see “Apres IOM, le Deluge!“), I am sure the new Rozerem ads will get a close look and pass muster.