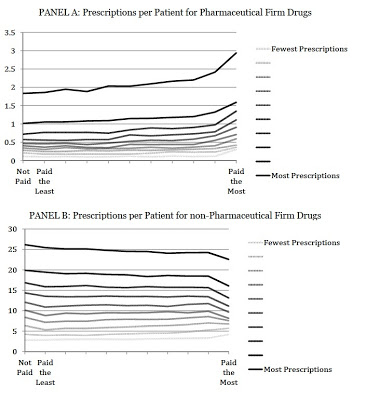 Doctors in the US who are paid and entertained by drug companies are more than twice as likely to prescribe their products, according to a “groundbreaking new study on the influence of industry marketing on medical practices” (find the study here). The findings are based on “recently released data that 12 companies have been forced to make public as a result of US regulatory settlements,” reports the Financial Times.

“Among a sample of 334,000 physicians, researchers found a typical doctor had a 13 per cent chance of prescribing the drugs of a dozen leading pharmaceutical companies. Among the 193,000 who received meals or speaking, consulting or other fees from the companies, the probability jumped to nearly 30 per cent.”

Physicians have longed claimed that a meager “free lunch” would not influence their prescribing behavior (e.g., 72% of physician respondents to a Medscape survey indicated that they could be unbiased with prescribing habits if they accept lunches from pharmaceutical representatives; see “Doctors Miss Their Free Lunches Says Survey“). Studies such as the “groundbreaking” one reviewed here, however, seem to indicate otherwise.

From these plots, I see that the Rx per patient lines rocket up or dive down only for physicians who are “Paid the Most.” I don’t know exactly how much that level of payment is, but it certainly must be greater than one or two “free” lunches. The authors of the study note that “key opinion leaders” (KOLs) receive hundreds of thousands of dollars a year in industry funding, although the average payments were just $1,700 per doctor in this study. That average payment must be in the 50% decile range — where the plots are relatively flat.

Thus, to successfully influence “ordinary Joe” docs to increase Rx’s for their drugs, pharma companies must go beyond free lunches and pay them significantly more than the average of $1,700 per year by my estimate. Given that 50% of these new Rx’s may never be filled or will be abandoned early due to poor adherence, is the return on investment (ROI) worth all the negative publicity these payments are currently generating?