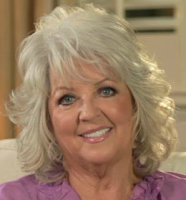 Whilst on the supermarket checkout line, I noticed the cover of the latest, July 9, 2012, People Magazine that featured Paula Deen (see image below). “How I Lost 30 Lbs!” was the headline. Under the banner announcing PAULA’S GET-SLIM RECIPES, the magazine invites us to learn her “secrets”: “After diabetes diagnosis, the southern chef finally changed her lifestyle and her pants style. Her secrets will surprise you!” 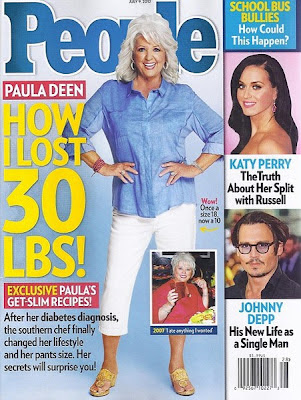 Deen is really looking good and I cannot wait to discover her “secrets.” But, first, I should note that Deen lost those 30 lbs not immediately after she was diagnosed with diabetes over three years ago, but after she signed on with Novo Nordisk to be their diabetes/Victoza spokesperson (see “Paula Deen & Victoza: Brilliant or Dumb?“).

Since then Deen and her sons have been creating recipes for “Diabetes Light,” a Victoza-branded web site that features “Recipes from Paula with a Dash of Inspiration” (here).

BTW, Novo should get a more recent photo of Deen than the one it currently uses on the “Diabetes Light” website (shown on right). The current one shows a much heavier-looking Deen prior to her recent weight loss.

I wish Deen luck in keeping her weight loss. I know from personal experience that you can lose 25-30 lbs if you change your diet, but quickly gain it back once you regress to your old ways of eating.

Anyway, Paula’s “secrets” include these changes in the way she says she eats:

Meanwhile, however, Deen has been promoting quite a different menu to her 786,000 Twitter followers:

Are y’all ready for Independence Day? Make sure you fix up one of these recipes for the big day! http://ow.ly/bULkY http://ow.ly/i/JuXN

One look at these carbohydrate-rich recipes on PaulaDeen.com and you understand why Novo is not sponsoring Deen’s Twitter account:

I suppose I can eat just one Cheesiest Fried Chicken Empanada with a touch of Chili Con Queso Dip, but how am I supposed to eat just a bit of Bacon Wrapped Grilled Corn on the Cob, which calls for 1 Lb of bacon for 8 ears of corn? That’s 2 oz. of bacon (300 calories) per cob, not counting the butter I would likely spread on it!

[Thanks to @Paullikeme from patientslike.com for suggesting MPD — and not Schizophrenia, as I originally suggested — as the correct DSM-IV diagnosis.]

The fact that Deen has lost 30 lbs is good news for Novo, which received a lot of criticism for its choice of Deen as a diabetes spokesperson. To date, my little poll (below) suggests that a plurality (if not a majority) of people believe the Novo Nordisk deal with Paula Deen was a “Dumb” idea from a marketing perspective. Many people who were unsure may now think it wasn’t such a dumb idea after all. What do you think?

Meanwhile, I invite you to listen to this conversation with Ambre Morley, Associate Director, Product Communications, Novo Nordisk, about why her company teamed up with celebrity chef Paula Deen as a spokesperson for type 2 diabetes treatment:

Is Deen Positioning Herself as a Potential CHANTIX Spokesperson?
I just picked up a copy of People magazine and learned that “Paula’s Next Challenge: [is] Quitting Smoking.” She says she “thinks about quitting every day…My husband has quit for over a year now. Maybe one day I’ll be ready. I pray that I will,” said Deen.

If past experience is any guide, Deen will be “ready to quit” as soon as she closes a deal with Pfizer to be its CHANTIX celebrity spokesperson!