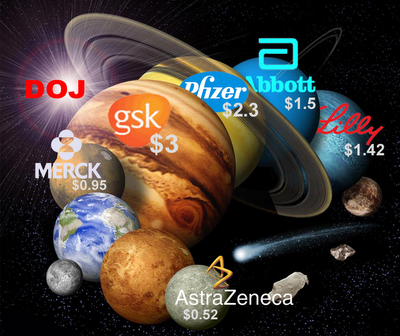 The Department of Justice (DOJ) just released a commemorative poster highlighting the six most-recent multi-million dollar settlements that drug companies have agreed to pay for inappropriately, and in some cases illegally, promoting prescription drugs. The poster represents just the latest version of the “DOJ v Pharma Settlement Planetary System,” which still has room for additional members (see unidentified objects in the poster).

Here’s a description of the planets and how they were “discovered” as reported by ProPublica (here):

Avandia and Janet Woodcock, the Next FDA Commissioner