Over the months I have reviewed several of Pfizer’s digital and social media efforts and have said that the company is good at promoting its digital efforts but not so good when it comes to implementation (see, for example, “Pfizer, If You Are So Smart, How Come You Were Hacked By ‘Kiddies’?“).

In one of my Twitter news feeds, I learned that Pfizer’s Chief Medical Officer, Freda Lewis-Hall, M.D., was a guest on The Doctors daytime TV show. The segment is titled “Keep an Eye on Your Blood Pressure” and you can view it here on Pfizer’s Corporate YouTube channel. It’s part of Pfizer’s Get Healthy, Stay Healthy “campaign,” which also includes a blog that features Dr. Lewis-Hall but also includes posts from other Pfizer physicians (here).

The Get Healthy, Stay Healthy blog covers a range of health conditions for which Pfizer markets products. No products are mentioned. The blog post about hypertension is entitled “Managing High Blood Pressure Takes More Than Just Medication.”

When you clickthrough to the Pfizer Youtube home page, you can see that Pfizer is all over the social media landscape, including Facebook, Twitter, LinkedIn, Slideshare, and Blogs: 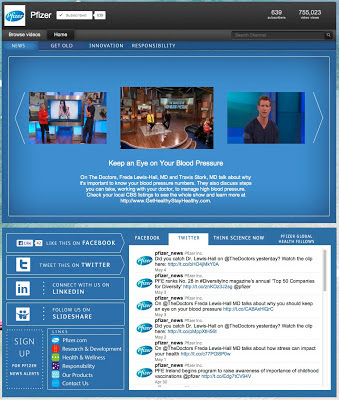 I have always said that pharma’s best public relations ambassadors are its scientists and that includes medical professionals such as Dr. Freda-Lewis and NOT sales representatives, which were once deployed by GSK to improve its reputation among the general public (see “GSK Strikes Back with a Grassroots Campaign“).

Another Pfizer science-focused blog that I frequently visited in the past — but not recently — is the Think Science Now (TSN) blog, which featured interesting posts by Pfizer scientists. I was drawn to this blog by tweets from @pfizer_news such as “Dangerous chemistry at home. Read TSN Member Adam Gilbert’s blog on Ned trying to unclog a sink/shower drain: http://on.pfizer.com/iKb4dQ”

Don’t try clicking on the link in that tweet to view the TSN blog. It is no longer available. I also note that there’s a TSN tab on the Pfizer Youtube channel as depicted above. None of the links under that tab work — all you get is the dread “404” error page (“Error: Page not found on Pfizer.com”).

Obviously, Pfizer needs to pay more attention to its digital properties and get rid of these dead links. This is just another example of Pfizer’s somewhat shoddy digital/social media implementation.

More interesting to me, however, is that Pfizer has abandoned promoting science and now sticks closer to its marketing prerogative; i.e., medical advice around conditions for which it has treatments to sell to the public. Geeky science blogs such as TSN do not have the same kind of return on investment (ROI) as do medical advice blogs — especially when you can integrate these blogs with popular daytime TV show appearances! The latter ROI is more in tune with sales.