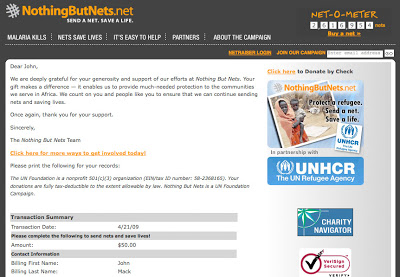 Last week I decided to test the power of Twitter to advance social causes by offering to donate $50 to a charity if I had 1,000 followers by Monday morning. I encouraged people who were already following me to “retweet” (aka RT) my message so that THEIR friends/followers would see it and possibly continue the retweet chain throughout Twitterdom.

Several of my friends DID RT and Xavier Petit, an ePharma Pioneer Club member, even pledged to match my contribution.

Currently, I have 985 followers and although this is short of the goal I set, I decided to make the contribution as a thank you to everyone who helped me out and also because it was the right thing to do.

The charity I chose was Nothing But Nets, which is a grassroots campaign to save lives by preventing malaria, a leading killer of children in Africa. It uses donations to buy anti-malaria bed nets. My $50 donation will buy 5 nets.

I got the idea when Ashton Kutcher challenged CNN to become the first Twitter user to reach one million followers. At stake was a pledge from the winner to donate 10,000 anti-malaria bed nets. Kutcher won!

Perhaps I should have challenged Xavier, but I am glad he volunteered to match my donation. Of course, I didn’t reach my goal, but I still hope Xavier will donate his $50 anyway.

Here’s part of the receipt from Nothing But Nets just to allay any skepticism. After all, nobody really knows what you are doing just by following you on Twitter!