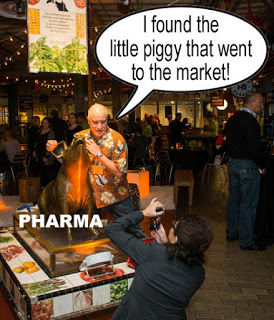 I attended the 10th Annual Digital Pharma East conference in Philadelphia last week. One of the highlights for me was the “after party” hosted by Intouch Solutions at the Reading Terminal Market.

Intouch was celebrating the conclusion of its 2016 #ALLin program, which was yearlong cross-country campaign that involved traveling with a custom Airstream trailer and hosting “health hackathons.” You can learn more about that in this interview of Wendy Blackburn, Executive Vice President at Intouch Solutions, in which she also talks about her views on how digital devices such as wearables will transform the pharmaceutical and healthcare industries.

While at the party, I saw an opportunity for a selfie with the Market’s iconic pig statue.

This piggy’s name is “Philbet,” which was inspired by the market’s Filbert Street location but with the f changed to ph as per local (i.e., the Phillie Phanatic) custom.

Other people photographed me with the pig including my friend Latizia Affinito (@laffinito) with whom I co-authored the book “Socialize Your Patient Engagement Strategy” (buy it on Amazon here).

At the time, I knew there was metaphor I could attach to the photo and the image shown here is what I came up with.

What’s the basis of this metaphor?

Simple: More and more pharma companies are being called out for raising drug prices and being “greedy” as pigs (not that I condone the portrayal of pigs as greedy – no one’s more of a friend of pigs than I am, no one!).

Bernie Sanders, for one, has been busy calling several pharma companies greedy.

Recently Sanders criticized Eli Lilly, which raised the price of its insulin drug Humalog by 700 percent in 20 years when adjusted for inflation. Novo was also on Bernie’s hit list but Novartis claims it hasn’t raised its insulin product price since 2014 (which could be the answer to the loaded question: “When was the last time you greedily raised insulin prices?”).

Back to the little pig metaphor. Let me paraphrase the popular nursery rhyme:

This little piggy charges $300,000 per year for its Duchenne drug,

“No one’s more frustrated than me,”
all the way to Congress!