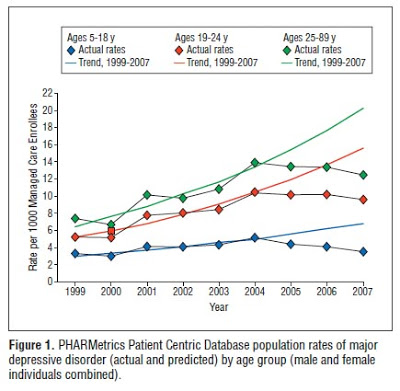 There’s been a lot of angst over an increase in FDA enforcement letters and the effect they might have on the bottom line. Mostly, however, all the angst comes from agencies and channels that lose advertising revenue as a result. The sales and stock prices of companies receiving such letters are not much affected (see “Ramifications of FDA Regulatory Actions”; PMN Reprint #85-02).

FDA warnings of risks associated with a drug or a class of drugs, however, can have a much more dramatic effect on diagnoses and related pharmaceutical sales as a recent study regarding depression diagnoses shows. Here’s how this study — published today in the Archives of General Psychiatry — was summarized in the LA Times this morning (see “FDA warning on antidepressants have depressed depression diagnoses“):

“After five years of steady growth, diagnoses of depression in patients of all ages dropped like a rock in 2004, the year after the Food and Drug Administration warned that the current generation of antidepressant medications increased the risk of suicide and suicidal thinking in children.”

Although by 2007 “depression diagnoses had begun creeping back up.. physicians were still less inclined than they had been before the FDA’s warning to diagnose a patient of any age with depression and to offer medication.”

“The study is the latest to suggest that the FDA’s warning — and the media coverage surrounding the issue of SSRIs and suicide — have set back progress in treating depression, a condition that the mental health profession believes is seriously underdiagnosed.”

Considering that many people think that the “mental health profession” is practically in bed with pharmaceutical companies and is responsible for OVERdiagnosing depression — especially in children — this “drop like a rock” decline better be described as a “correction.”

Figure 1 from the study — shown above — does show the dropoff in new diagnoses, but I would hardly characterize it as “dropped like a stone,” which would be a more apt description of my recent 401K valuation, which makes ME very depressed.

The study authors draw two conclusions from the data:

The spillover to adults is one “unintended effect” of FDA’s regulatory action, claim the authors.

The authors hint at another “unintended effect”: an apparent increase (or lack of decrease) in suicide rates for youth aged 10 to 19 years.

The third “unintended effect” cited by the authors is the cost to society due to loss of employee productivity caused by depression — saying it could outpace the $152 billion economic stimulus package passed in early 2008.

Meanwhile, the 10% to 15% drop in prescriptions written for for SSRI anti-depressant drugs — an “expected consequence” — after FDA’s warnings “were smaller than reported earlier,” noted the authors.

The authors end by suggesting that their study presents “evidence of substantial, persistent, and diffuse unintended effects,” which the FDA should consider. In their opinion, FDA should change its policy regarding the safety of antidepressants.

Oh yeah, Drs Libby, Orton, and Valuck (study co-authors) report “unrestricted investigator-initiated research grants from Eli Lilly and Company and Forest Pharmaceuticals.” Although the disclosure statement at the end of the article is no more specific than that, I assume that the grants were given specifically to conduct this study.