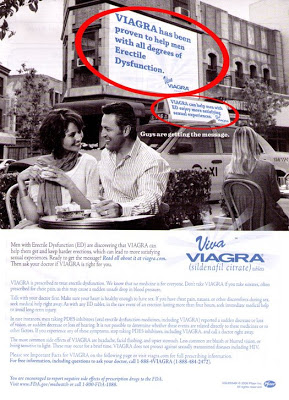 A new (to me) Viagra print ad caught my attention in this week’s Business Week (or was it Newsweek?) magazine.

The ad is an example of advertising “art” imitating life — life, that is, as drug advertisers would like to see it if only those pesky FDA regulations didn’t get in the way.

The “Viva Viagra” ad I’m talking about is shown here (click on the image for an enlarged view).

I’ve circled two areas of this ad’s imagery, which takes up more than 50% of the ad space, to illustrate what I mean. The circled areas show outdoor Viagra ads WITHIN the print ad!

If such outdoor ads existed in the “real” world, they would violate FDA regulations regarding fair balance because they do not mention any side effects or risks, just the benefits.

The tag line of the ad, “Guys are getting the message,” obviously refers to these messages that dominate the world within the ad to which the “guy” in the ad is exposed.

If Viagra were an over-the-counter (OTC) medication, outdoor ads like the billboard and taxi ads shown in this print ad would be perfectly legal. Which leads me to believe that Pfizer is preparing the Viagra brand for OTC status. As you may know, Viagra will lose its patent protection as early as June, 2011, so it’s not too early for Pfizer to subtly plant these OTC ad images in our mind.

Viagra was sold over-the-counter (actually behind-the-counter and requiring physical exam, etc.) in the UK for a while, but that program was stopped by the EU. “Despite its withdrawal, Pfizer said Viagra meets all the European Commission guidelines and requirements for non-prescription drugs,” said the “blog for men who buy viagra, cialis, and levitra online.”

ACCME to Pharma Ad Copywriters: No Double Dipping! Stay Out of...