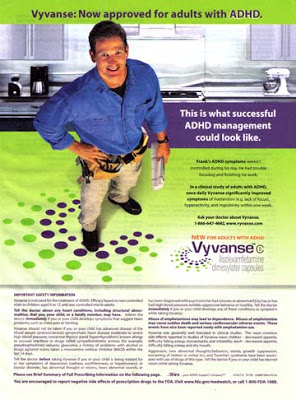 By the time the FDA issues a warning letter about a DTC ad that violates FDA regulations — as it did on September 25, 2008, for a video testimonial featuring Ty Pennington posted on youtube.com by Shire — the cow has long left the barn.

This is at least the second time recently that the FDA has cited an online video ad as violative. The first was a Pfizer Viagra video (see “Violative Viva Viagra Video – Still There!“). That video was misleading, said FDA, “because it makes representations and suggestions about the use of Viagra for erectile dysfunction, but fails to disclose any risk information for the drug.” After the FDA letter to Pfizer became news, you could still see the video on its website, but now it is gone.

The Ty Pennington Adderall XR video can no longer be found on YouTube, which proves that Web 2.0 Tricks work! (see “Web 2.0 Pharma Marketing Tricks for Dummies“). I did, however, find another entertaining adult ADHD YouTube video, which you can find at the end of this post.

I am not sure when the Adderall XR YouTube video was removed, but I suspect it was long ago. First, Adderall XR was replaced by Vyvanse some time back. FDA must have known about this and probably wrote the letter before that happened. That it did not send the letter until September must mean that it was tied up in FDA’s controversial internal legal review (see “FDA DTC Review: The House that Troy Built“), which allows violative ads to run uninterrupted until the media budget for the ads run out.

Not only that, I also notice that Ty Pennington is no longer the spokesperson for this drug as he was back in October, 2007 (see “J&J Blog, Shire PR: The Whole Story and Nothing But the Whole Story!“). I cannot find him on the Vyvanse website.

Ty Pennington Look-alike Ad
But Shire continues to use a Ty look-alike in print ads (a ploy similar to the “PC Guy” look-alike in Microsoft “I am a PC” TV ads). I found the following full-page Vyvanse ad in a recent issue of Time Magazine.

Clearly, Shire is milking the Ty Pennington franchise for all it’s worth, but no longer paying the high celebrity endorsement fees. Maybe Ty did something to fall out of favor with Shire? Like switch over to shilling for Bayer aspirin? Could this be the “Linda Lovelace” Deep Throat effect?

LOL! How Much Did Pfizer Pay for @Pfizer? Merck for @Merck?...