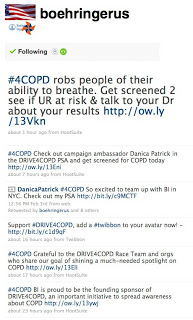 #4COPD robs people of their ability to breathe. Get screened 2 see if UR at risk & talk to your Dr about your results http://ow.ly/13Vkn

It’s part of a huge effort to roll out the new “DRIVE4COPD” campaign that BI is sponsoring. BI is jamming its Twitter account with similar messages (see image on left, click to enlarge).

I just saw Danica a couple of nights ago on a TV show promoting the upcoming SuperBowl ads. She will appear in a lingerie ad, I believe. But she has all her clothes on in the DRIVE4COPD campaign, which is included in the photo montage below: 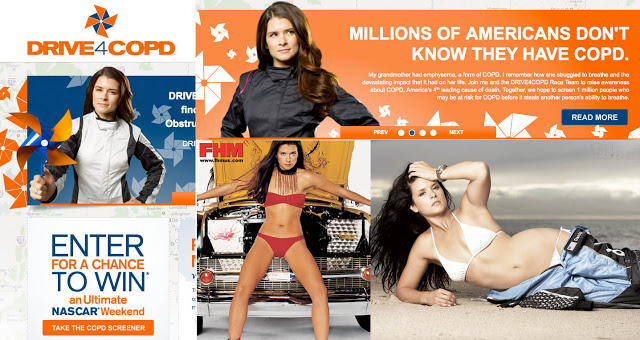 The campaign points out that “COPD is the 4th leading cause of death in the US” and “an estimated 24 million Americans are affected” and “over half of them don’t even know it.”

In fact, I didn’t know that I MAY have COPD! But thanks to the COPD POPULATION Screener™, which the DRIVE4COPD campaign urges every one to take (see the DRIVE4COPD Web site), I now know it and will talk to my doctor about it, which is the goal of DRIVE4COPD.

You too can find out if you MAY have COPD by taking a simple 5 question test! I had no doubt that I would score high enough to be at risk because:

This is not the first time that I have taken such a screening test without any idea who came up with the questions or how the answers determine whether or not you have a medical condition. In small print, however, I see that the COPD Population Screener is a trademark of QualityMetric Incorporated, which, as far as I can tell, gets its data from surveys of patients.

After taking the SCREENER, you can vote for which DRIVE4COPD Race Team Member (Danica, Bruce Jenner, Jim Belushi, Patty Loveless, or Michael Strahan) you want to win the “Race for the Missing Millons.” I don’t know exactly what that means, but guess who I voted for?

Regardless of the scientific validity of the COPD Screener, or the other tricks employed to get people involved, I think DRIVE4COPD is a worthy campaign even though BI may profit from it (BI markets Spiriva for the treatment of COPD).

AFTERWORD: NASCAR is a sponsor of DRIVE4COPD along with BI and has renamed an upcoming Daytona race the “DRIVE4COPD 300.” Now that I think about it, I find NASCAR and COPD to be an odd coupling. Here’s a smog-producing organization/event sponsoring a cause to help people breathe better! In fact, the whole idea of “driving” for COPD is odd! I guess BI doesn’t mean that we should all go out and drive our cars for COPD awareness. At least not our Toyota cars!

FDA Has One More Internet Guidance to Publish in 2014: Links