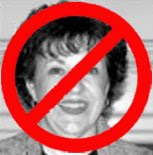 Back in August, 2008, I asked Debbie Phelps to be my Facebook friend but I never did hear from her, which prompted me to write a post about the ADHD Moms™ Facebook group sponsored by McNeil Pediatrics™, Division of Ortho-McNeil-Janssen Pharmaceuticals, Inc., a J&J company (see “J&J, Debbie Phelps, You, Me, Facebook: Is This Social Networking?“).

At that time, Mrs. Phelps was a “Leader” of the ADHD Moms™ Group. Today, however, she has been purged from is longer part of the site. No longer is she a leader of the group and the article she wrote — “Back to School: Help Your Child with ADHD Succeed In and Out of the Classroom” — is not to be found on the site.

I’m not saying that this is punishing the parent for the “sins” of the child, but it’s cruel because what Mrs. Phelps is dealing with may be what many parents of children — even adult children — with ADHD must deal with! I, for one, would have loved to hear what Debbie’s thoughts were on her son’s bad bong behavior at a party.

[I admit that I do not know the real reason why Debbie Phelps was “purged” from ADHD Moms™ It may be that she requested that her name and article be removed, but I doubt it [SEE BELOW]. In any case, friends of ADHD Moms™ — of which I am one — have not been notified about this. Instead, McNeil Pediatrics posted this notice on the Group page: “ADHD Moms™ has a new look! Facebook has changed its Page design in an effort to improve the user experience. Stay tuned for new features in the coming weeks.” Put the blame on Facebook!]

Just so you know: Debbie Phelps still has a Facebook page and the following are typical of messages from other ADHD moms (real moms of kids with ADHD, not ADHD Moms™ Facebook Group members) posted to Debbie’s Wall:

“We still love you and Michael too. Just remind him that he is a role model and a beacon for all kids with ADHD. We need for him to take care of himself and to do all that it takes to be in good health.” — Caren W. Madsen, Washington, DC (shown here hugging president Obama who’s loving it!).

“I just wanted to show you a little motherly support for what is going on right now. My kids love your son. I am sorry his life is in the spotlight all the time. While I do think he is a role model, it is my job to explain to my children that role models are still human. Humans make mistakes. Best wishes.” — Ann Mitchell Caren, Atlanta, GA

HURRAY for REAL ADHD moms! As opposed to the virtual ADHD Moms™

Too bad McNeil Pediatrics missed an opportunity to REALLY support a real ADHD mom by supporting Debbie Phelps and keeping her involved in the ADHD Moms™ Facebook Group.

“The rise in botched endorsement deals with the likes of Michael Phelps and Chris Brown has marketers rethinking recruiting young, megawatt stars as brand ambassadors, celeb watchers said today at a gathering of top advertisers,” claims an article in today’s AdvertisingAge (“At Least Elvis Can’t Get Caught Smoking Pot“).

“One way to hedge your bets: Make a deceased celebrity the face of your brand. They are (for obvious reasons) far less likely to ignite media firestorms with callous behavior.”

In the case of McNeil Pediatrics and ADHD Moms™, I think the media “firestorm” over Michael Phelps’ pot smoking incident could have been a great opportunity to raise more awareness about ADHD issues.

Now, don’t get me wrong. I am no fan of celebrity endorsements of Rx drugs. However, in the case of ADHD Moms™, we’re talking about using celebrities for disease awareness promotion, which I don’t have too much problem with as long as the celebrity actually has the disease or is related to someone who has the disease or is a caretaker of one. Whatever. You get my point.

Debbie Phelps’ departure from our ADHD Moms(TM) community was scheduled to occur in January 2009 and to prepare for it, we shared this news with fans in a few ways that month. Starting on January 7, 2009, we sent a notice to our Facebook community fans about Debbie’s departure; it was sent to the “Updates” section of fans’ personal Facebook pages. It read:

“New Year, New Start!
Wednesday, January 7, 2009
New Year, New Start! ADHD Moms will unveil new features and new faces in 2009. This month, Debbie Phelps passes the torch of advocacy to ADHD Moms fans and shares a note of thanks for the memories and support in 2008. Be sure to visit ADHD Moms frequently as we introduce new resources to the community in the coming weeks.”

Additionally, from Jan. 7 through Jan. 30, 2009 we posted Debbie’s good-bye letter along with a farewell letter to her from our community on our Facebook website homepage.
Thanks, Tricia Geoghegan
McNeil Pediatrics