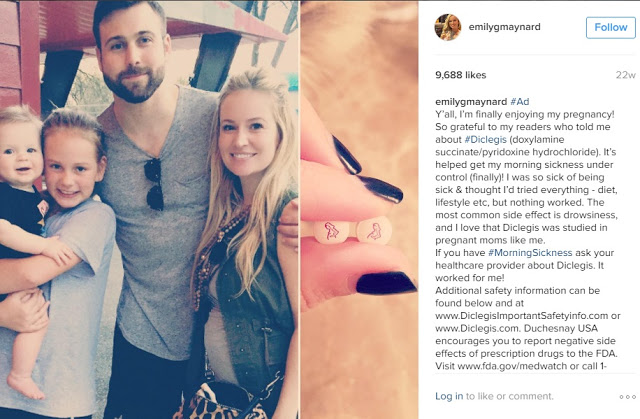 About 22 weeks ago, Emily Maynard Johnson, who appeared on ABC’s The Bachelor and The Bachelorette, posted the following Diclegis promotion to her Instagram account:

I assume you’ve noticed that all the ISI (Important Safety Information) and side effects are mentioned either through links or, more importantly, within the post itself (you have to scroll down to see it).

This is in contrast to Kim Kardashian’s Diclegis Instagram promotion that made news last year. That ad drew a prompt warning letter from the FDA to Duchesnay USA, which markets the drug, because the post did not mention nor did it link to any ISI or side effect information as required by FDA regulations (for more on that read “OMG. Kim Kardashian Shills for Pharma! No Worry – No Side Effects!” and “Celebrities + Social Media“).

There are a couple of other important differences between these two celebrity Instagram endorsements/ads.

According to a review by MM&M (here), “Duchesnay has hit its stride with Instagram. [Dean Hopkins, general manager, Duchesnay] said Johnson has helped generate more awareness for morning sickness and Diclegis through her posts.”

Based on the number of likes, Johnson would have to post about 40 more of these ads to Instagram to be as effective as one Kardashian post. Which just goes to prove that nice guys (and gals) who follow the rules finish last.

One more important difference. Whereas there were over 10,000 comments to Kim’s post, you cannot submit comments to Emily’s post. That’s because Instagram now allows certain Instagram “high-profile” (i.e., celebrity) accounts to shut off or pre-moderate comments in such a way as to automatically block them. This option may also be available to pharma accounts that don’t involve celebrities (but who would follow such accounts??). You can read more about that here.

Hallelujah! The Recession is Over! Sales of “Lifestyle” Drugs Like Botox...