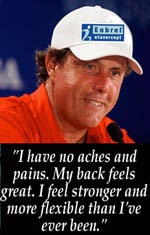 Phil Mickelson, 5-over, missed the cut at the Masters this year. Bummer!

Because of that, you might not see more Enbrel ads featuring Mickelson who is a hired gun – er, celebrity spokesperson – for the Enbrel brand (see “Amgen Blows Its Marketing Budget on Phil Mickelson Campaign“). Unless, of course, the TV ads were pre-purchased at a discount to run during the Masters.

It makes sense for Amgen to cut back on running the Mickelson-Enbrel ads if Phil is not going to be in the Masters. But Amgen already cut back on Enbrel advertising in 2013. That year, the Enbrel DTC spend was $77 million (see here) according to Nielsen. In comparison, the spend was $127 million in 2012 (see here).

Why did Amgen but back on Enbrel DTC in 2013 when Mickelson was doing well at the Masters and had a decent PGA standing?

Just for fun, I did some research to compare Mickelson’s PGA standing and Enbrel’s DTC ad spend from 2010, when Mickelson was first hired as an Enbrel spokesperson, to 2013, the latest year for which figures are available.

Here’s what I found.

It could be that there is actually a POSITIVE correlation if you were to shift the spend line on the above chart back one year. That makes sense because spending decisions must be made in advance. So Amgen could have decided to cut back on 2013 Mickelson-Enbrel ads back in 2012 when his PGA standing slipped to #14 vs #6 in 2011.

This was just a fun thing to do on a Saturday morning before going out and enjoying the fine weather — maybe even playing a little golf!

Who Owns Your Social Media?