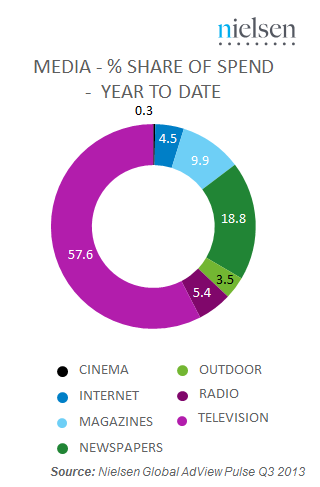 April is the nicest month — for data about direct-to-consumer (DTC) ad spending for the previous year thanks to MM&M magazine, which published Nielsen data in this month’s issue. I’ve summarized the data in a couple of charts as I have done in previous years.

Keep in mind that the absolute numbers refer only to “measured” media (broadcast, print, outdoors, and B2B) and, in this case, does NOT include digital ad spending (more on that later). The numbers also do not take into account discounts — they reflect “list” pricing as it were. At least that’s my understanding.

The important take aways are the trends and comparisons between companies and brands AND estimating how much is spent on digital versus traditional media. More about that later in this post.

According to Nielsen, on a global scale, for ALL industries, Internet advertising continues to be the fastest-growing but display advertising across the “web, mobile internet and apps collectively grew by 32.4% in 2013 — by far the biggest leap of any media — but that still worked out to a 4.5% share of the overall spend in ads. In contrast, television grew only 4.3% but remains the behemoth when it comes to ad spend, taking nearly 58% of the market,” reports Tech Crunch (here).

Pharma devotes an even smaller sliver of the ad spending pie to digital. According to Larry Dobrow writing in MM&M (here), “the top overall brand, Cialis, devoted just $6 million of its marketing spend to digital, a meager 2.7% of its budget. The third highest-spending brand, Celebrex, similarly gave only passing consideration to digital: $5.4 million, which represented 3.5% of its ad expenditures. Humira (for arthritis), ranked fourth in brand spend, devoted less than $1 million to the digital space, and it wasn’t alone: of the top 20 brands, 16 didn’t clear that $1 million mark.

“With companies,” said Dobrow, “it was the same story. Pfizer, the biggest overall and digital spender, alloted $21.5 million of its $872.2 ad budget to digital, amounting to a measly 2.5% of its outlays. Percentage-wise, other top spenders devoted even less: Lilly ($9.9 million, 2.2%), AbbVie ($1.2 million, 0.3%), AstraZeneca (around $100,000, 0.03%) and Merck ($5.1 million, 1.8%). Towards the bottom of the top 20 companies, only Sumitomo showed any kind of real commitment to digital—and that was just $3.8 million of its $29.7 million in spending, or 12.8%. The Nielsen digital data doesn’t include spending on Yahoo! sites, Realtor.com, MySpace or YouTube, but however you measure it: companies and brands aren’t walking the walk when it comes to digital.”