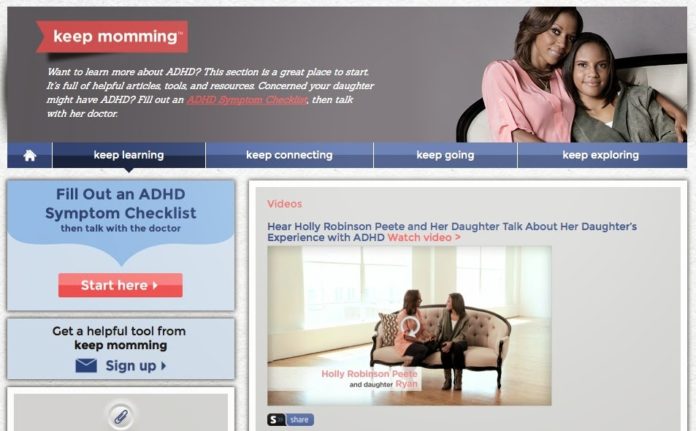 Social media and real patient stories are a “match made in heaven.” Combine that with a celebrity spokesperson who is also a patient or a caretaker of a patient and you got gold!

That’s how I see campaigns such as Shire’s “Keep Momming,” which was featured in the September 2014 issue of MM&M. According to the article (find it here), “The unbranded ‘Keep Momming’ campaign has more of a straightforward educational thrust: It seeks to help mothers better identify the symptoms of ADHD in young girls and to make them more cognizant of the inattentiveness aspects of ADHD (as opposed to the easier-to-spot hyperactivity ones).”

Shire, you may recall, markets Vyvanse, a drug indicated for the treatment of ADHD in children and in adults.

This campaign includes a celebrity spokesperson: actress, singer, and NFL wife, Holly Elizabeth Robinson Peete who says her daughter has ADHD. Her story is featured in a video on Shire’s KeepMomming.com Website, the title of which is “Real Stories from Real Moms & Daughters.” 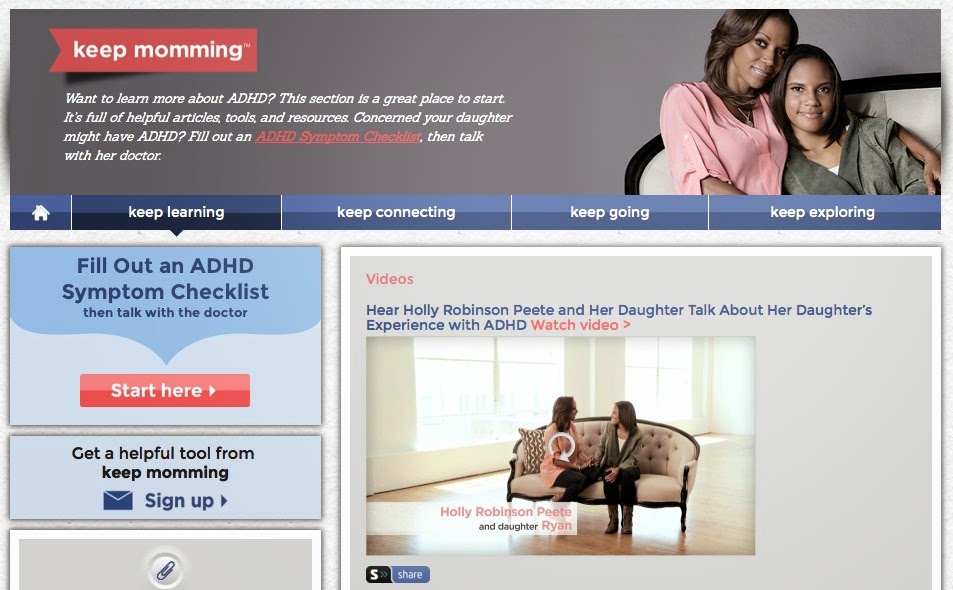 In the video, Holly talks about her daughter’s symptoms such as daydreaming, inability to focus on homework, “tears – a lot of tears,” etc. The diagnosis “made things a lot easier” and “when you know better, you do better.” She stops short of saying her daughter is now medicated, but presumably that’s what “doing better” is all about.

Although I am a fan of using real patient stories, I am a little uncomfortable using this powerful technique for controversial medical conditions like ADHD.

I say “controversial” because there are also a lot of moms out there who feel their children are being over-medicated for a condition that is difficult to diagnose and perhaps should not be treated with drugs alone. Consider this:

Key to the “Keep Momming” campaign is to get site visitors to take the “Symptom Checklist” (here) and bring the results to your doctor. “If you’re concerned your daughter might have ADHD [and who wouldn’t be after watching the videos?], complete the ADHD Symptom Checklist based on her symptoms for the past 6 months, and share the results with her doctor.”

All this “patient education” panders to the “ePatient” — the new breed of informed health consumers, using the Internet to gather information about a medical condition of particular interest to them. There’s plenty of information about ADHD on the site. But the videos reel visitors in like fish attracted to the bait.

“There is a growing desire to allow patients who have been on a particular therapy to interact with potential new patients considering their treatment options. What are some of the potential pitfalls that a company may face if they choose to provide a forum for this type of interaction? What do you consider to be some of the competitive advantages this strategy may convey?”

Can you help me answer these questions? Please take this survey:

Use of Patient Testimonials in DTC & Social Media Advertising

Social Media: Ask Permission to Join the Conversation First or You...