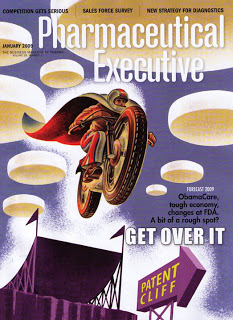 “The cover of this month’s Pharm Exec may look as if it’s about disaster, but that’s not the way we meant it,” says Patrick Clinton, Editor-in-chief, of Pharmaceutical Executive Magazine (see “Getting Across“).

I wonder if Patrick was anticipating that I would again spoof Pharma Exec’s cover image in this blog as I did last month (see “Pharmaceutical Executive Magazine’s Drug “Pipeline” Looks More Like a Money Drain!“)?

As you can see, the cover depicts a dare devil motorcyclist reminiscent of Evel Knievel attempting a jump over the “patent cliff,” which represents the drop off in sales of Rx brand drugs when many of them will go off patent in the coming years.

“It’s not about falling off a cliff,” writes Patrick, “it’s about crossing a bridge that extends from yesterday, and an old, failing way of doing things, to tomorrow, and a revitalized pursuit of new (still only dimly understood) goals. Admittedly, in our cover illustration the bridge is out. But the point is still to cross the gulf; the absence of a span just means you have to cross with a bit more energy. There’s also plenty reason to expend thought and creativity on the subject of landing.”

Is Patrick encouraging drug companies to be more daring like Evel Knievel?

Obviously, Patrick is concerned about all the troubled landings of dare devils, as he should be. For more on that, I offer the following YouTube video depicting Evel Knievel’s infamous landing during a stunt at Caesar’s Palace: